Carrots, Being in charge

Baby Bugs is the main protagonist in Baby Looney Tunes and the baby version of Bugs Bunny. He is voiced by Samuel Vincent, who also voiced Baby Daffy and Baby Tweety.

Baby Bugs is a four year old gray rabbit with a fluffy tail, white paws, muzzle, and chest. He has pale pink inner-ear coloring and a pink nose. He wore white gloves (like his adult counterpart) and a diaper in the episodes "Taz in Toyland" through "Taz You Like It".

Baby Bugs is seen as the leader of the group due to his older age and maturity. While normally friendly and fair, he can be bossy sometimes and cause conflict with Baby Lola or Baby Daffy, both of whom are also strong-minded and show leaderly qualities. Though generally quite confident, Bugs has anxious tendencies and will sometimes panic if he cannot achieve something properly on the first try. In this way, he relies on his friends to show him through.

Bugs normally doesn't fall for the same tricks the other babies might, and is initially suspicious of anything that is deemed too good to be true. He is often found playing with Baby Lola and loves to eat carrots. 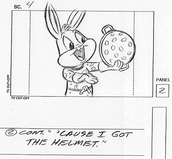 Bugs as he appears in the storyboards.

Bugs Bunny figurine from 2003
Add a photo to this gallery
Retrieved from "https://babylooneytunes.fandom.com/wiki/Bugs_Bunny?oldid=8212"
Community content is available under CC-BY-SA unless otherwise noted.