Playing with others, Her friends

Baby Lola is a main character in Baby Looney Tunes. She is voiced by Britt McKillip, the only child actor in the cast.

Baby Lola is a three-year-old bunny who resembles Baby Bugs, in that they are both rabbits with long ears, white muzzles, toes, chest, a pink nose, and pink inner-ears. Baby Lola has orange-tan fur, and her tail was the same color in the first season, and white in the second. She has light blue eyes and blonde hair with a tuft of bangs reaching her eyes. She wears a purple bow on her ears.

Like the other babies, except Baby Taz and Baby Tweety, she wore a diaper until several episodes later. Lola wears gloves with frilly cuff.

Baby Lola is one of the more mature babies of the cast, and acts like an older sister with a voice of reason. She is sweet and friendly, but she has a bad temper and won't resist telling others when she's upset or annoyed with them. Lola isn't afraid to rough house or play sports, but she also enjoys dressing up and playing house. Usually she can be found with Baby Bugs or her best friends Baby Melissa and Baby Petunia. 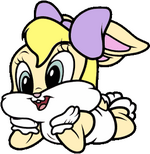 6-Flags exclusive Lola plush
Add a photo to this gallery
Retrieved from "https://babylooneytunes.fandom.com/wiki/Lola_Bunny?oldid=8271"
Community content is available under CC-BY-SA unless otherwise noted.