Not getting her way, chaos

Baby Melissa is a recurring character in Baby Looney Tunes and the baby version of Melissa Duck.

Baby Melissa is a female yellow duckling with an orange bill. She has green eyes and an orange ponytail, which is held up by a green bow.

Baby Melissa is a highly ambitious and thoughtful sort with a good nature, but, at times, she can be a control freak and get on the others' nerves. She can be prone to telling rumors if it benefits her, but has tried to learn not to do so.

In "Wise Quacker," after watching Ron Pickles, she decided to take on a habit of telling jokes, particular insulting ones. However, she realized her errors at the end of making fun of others, preferring to tell harmless jokes instead. 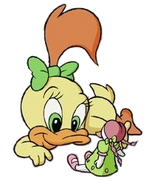 Add a photo to this gallery
Retrieved from "https://babylooneytunes.fandom.com/wiki/Melissa_Duck?oldid=8358"
Community content is available under CC-BY-SA unless otherwise noted.